Awesome. It was 7.32 in the morning and my alarm just rang – marking the day of departure to

Those of you who have also read our first blog post will notice the latest by now: We enjoyed the trip very much, and were confronted with restarts and milestones we had to achieve along the way. Plus, I like to set my alarm at 7.32 in the morning.

Accordingly, also the second day of our trip started relatively early. Some final preparations and a good breakfast later we drove from our lodge to Kilimanjaro National Park. By now it was around 9 a.m. There are different ways that bring you up to Uhuru Peak, the top of Kibo, the highest of Mount Kilimanjaro’s three volcanic cones. Timo and I opted for Machame Route, also referred to as Whiskey Route. Therefore, our driver aimed for Machame Gate, the starting point for this route. We had on board with us: Our guide Erasto, our co-guide Amos, our cook Juma as well as eight porters; thus, a group of eleven people in total, that Erasto had compiled for our tour. 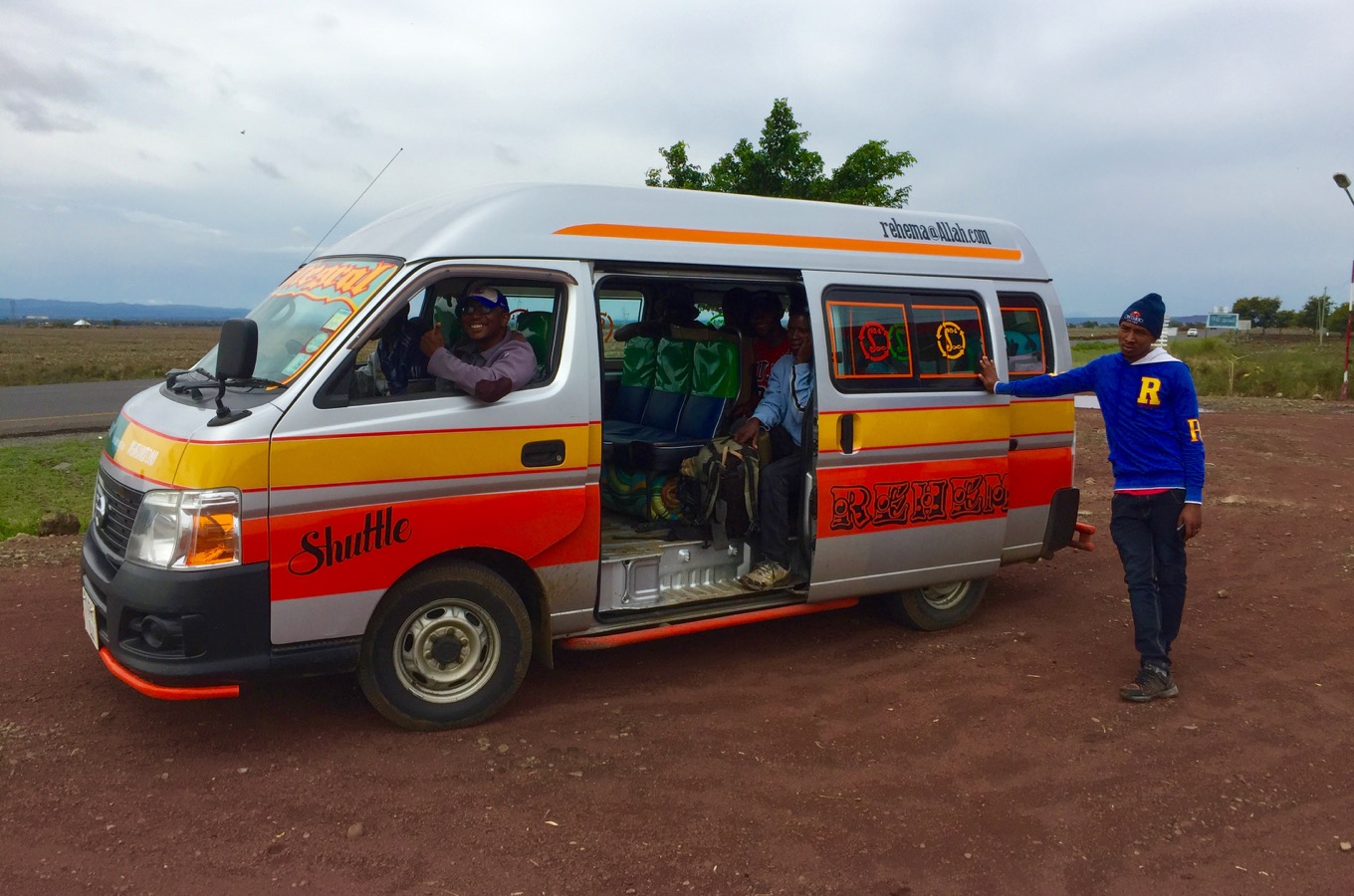 What seems to be an enormous escort for two people and reminds of Western colonial rule can be explained easily:

Tourism is one of the most important sources of income in the region. The thought of doing good and improving peoples’ usually low living standards by traveling is something important to us. Moreover, locals generally appreciate the exchange of ideas with tourists. 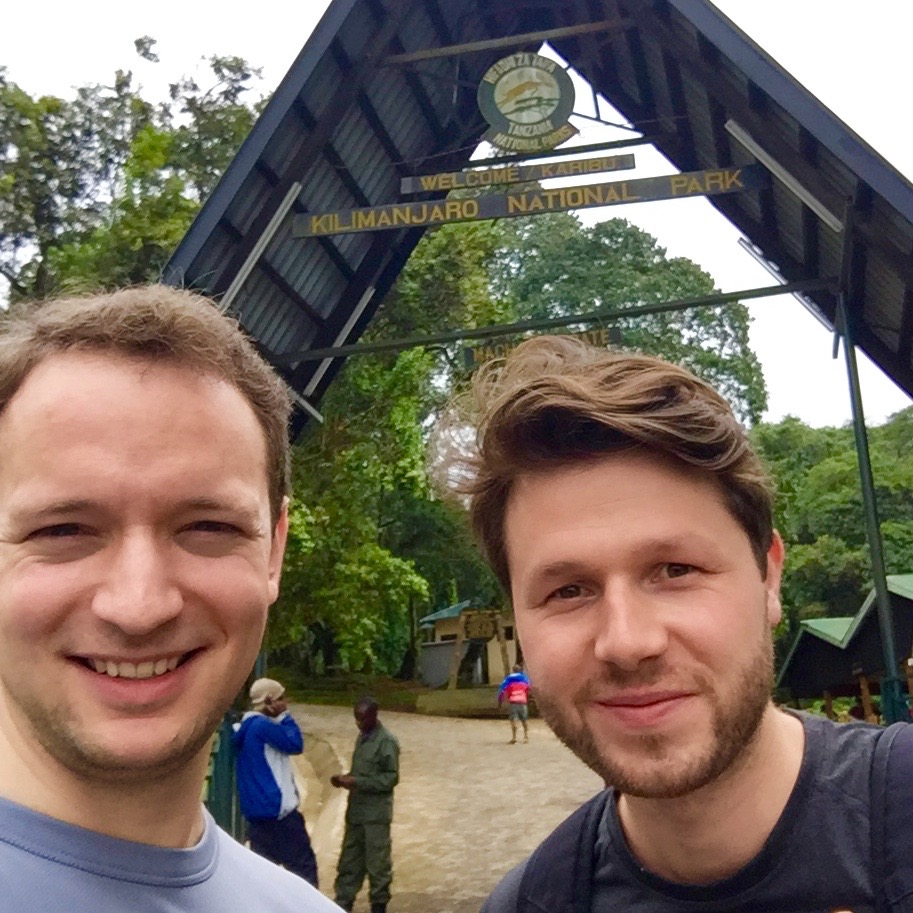 After a 45-minute drive we reached Machame Gate, the entrance of Kilimanjaro National Park. Upon arrival, we noticed that the air was already fresher and purer than at lower altitudes. Moreover, we noticed that we weren’t the only tourists. There were several smaller and larger groups waiting to start their hike. The largest group counted more than 20 tourists! 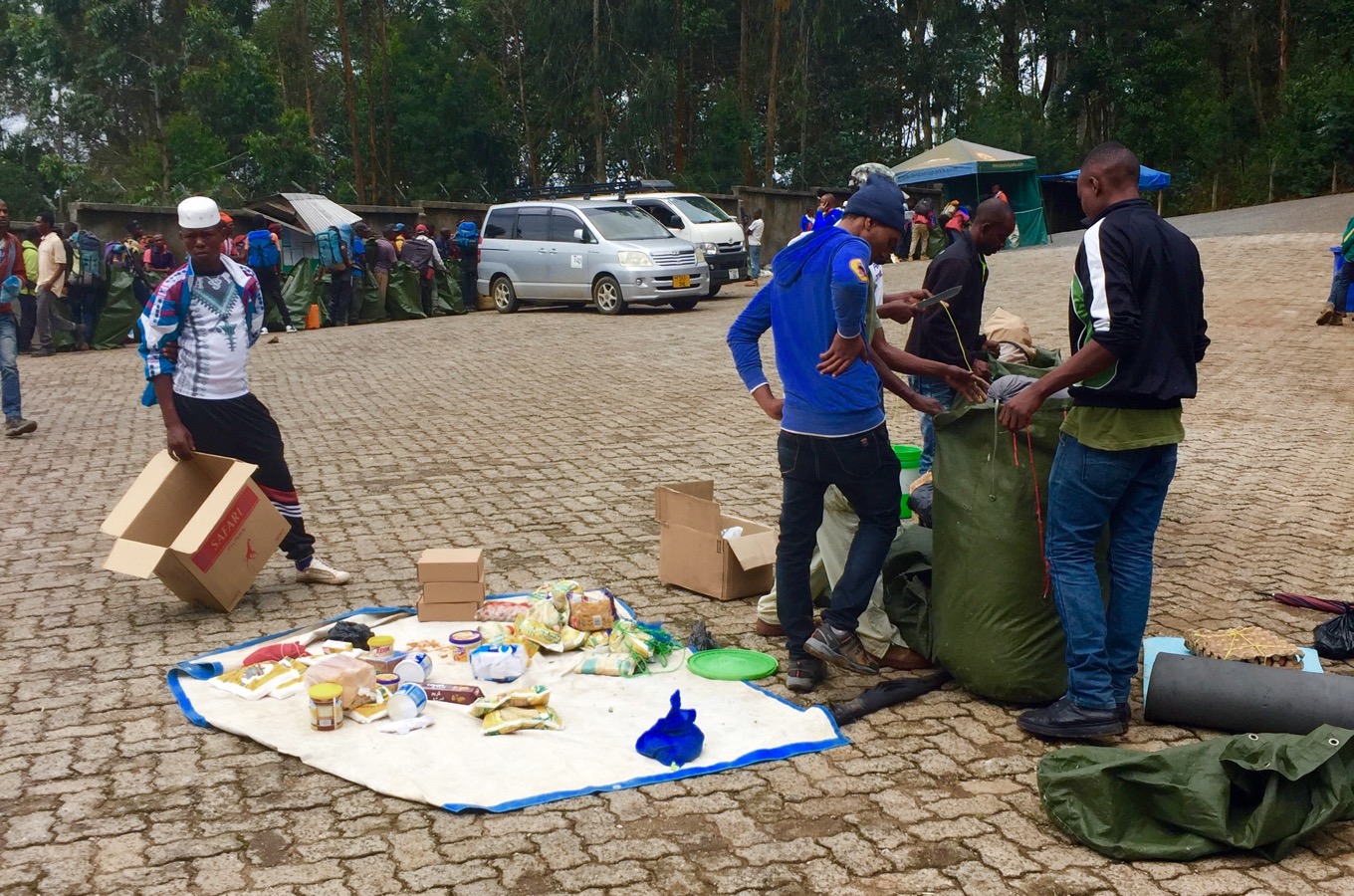 It took a while until everything was unpacked and prepared for the hike. We used the waiting time to register at the entrance of the national park, which is compulsory. At the registry, they required information from our passports, and about the people accompanying us, i.e. our guides. Thus, it is made sure that everyone who enters the park also leaves it at a later point in time. Moreover, the national park fee depends on the number of days you spend inside the park. That is another reason why the operator of the national park is interested in the number of days you spend inside the park. Due to a rising number of tourists over the last couple of years, the fee has been increased several times in the past. When we were there in March 2017, it was around 100 USD per day. 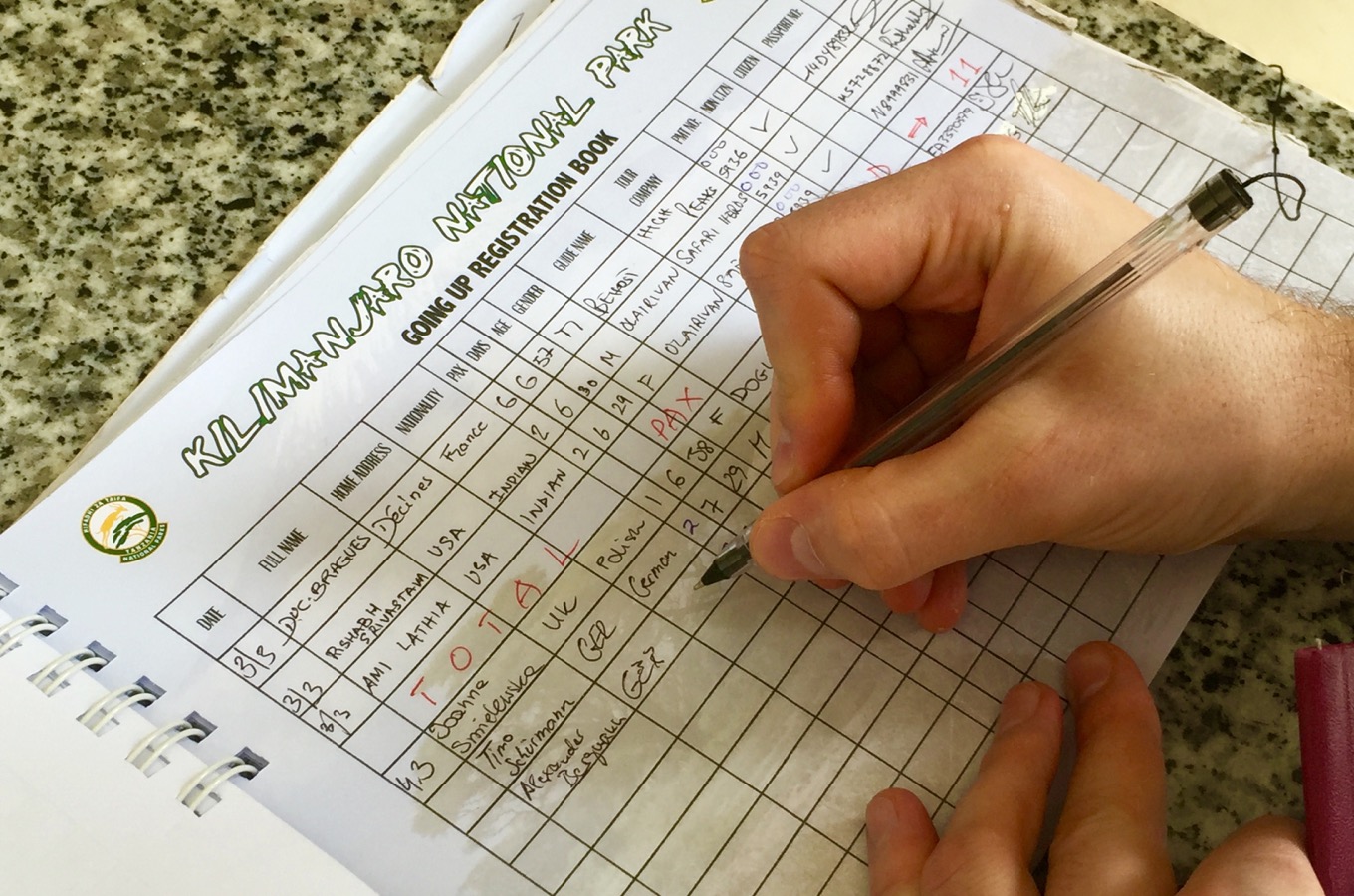 Finally, shortly before midday – into the forest!

The route between Machame Gate, one of several entrances to the Kilimanjaro National Park, and Machame Camp leads through a dense mountain rainforest. We walked on paths through the lush green. Up in the trees we saw groups of monkeys making their way through the leaf canopy every now and then. 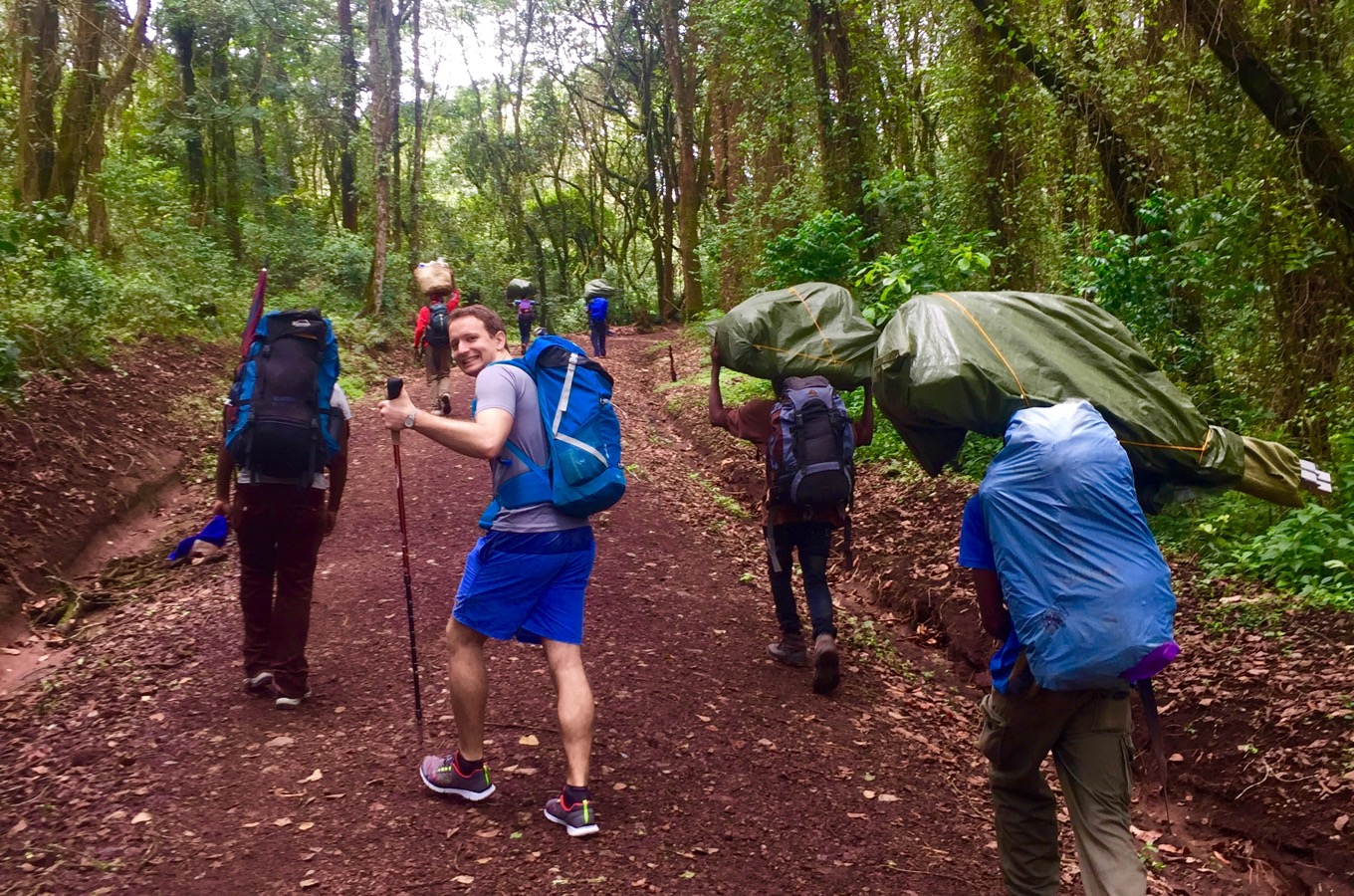 After an hour’s hike at an altitude of about 2,200 meters (around 7,200 ft), we took the first break. Our lunch packages included some bread, fried poultry, fruit juice and water. From the beginning of the hike on you should try to frequently drink water or juice. We recommend at least 3-4 liters per day. This prevents your body from dehydrating and suffering from altitude sickness. 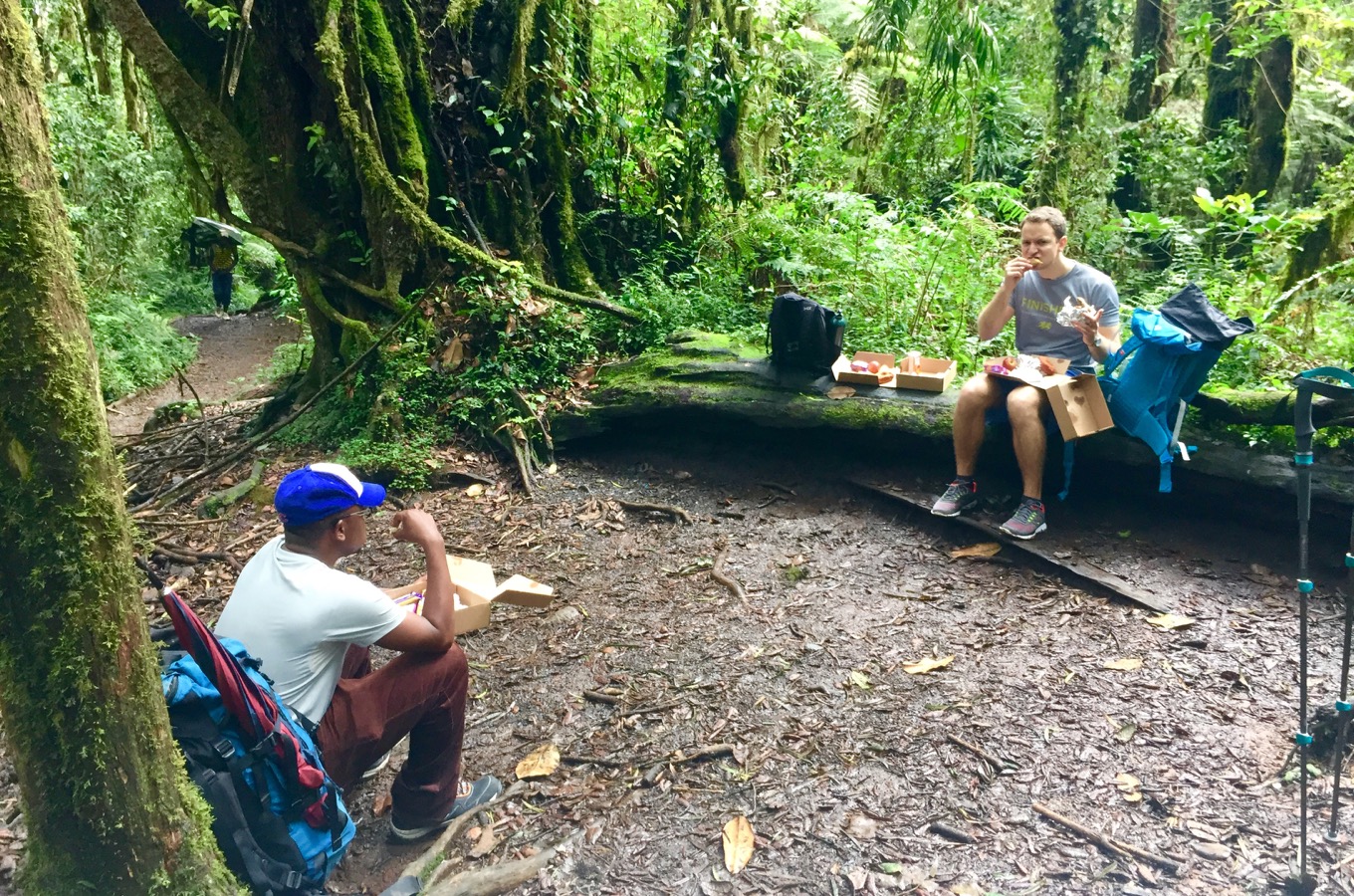 I found a so-called hydration pack

very useful, which is nothing else but a water bag with a hose. Thus, you have the mouthpiece always close to you. This is a clear advantage over an ordinary drinking bottle as it encourages you to drink more frequently. However, I would also take an ordinary 1 liter drinking bottle with me as it is more suitable for washing hands and brushing teeth. 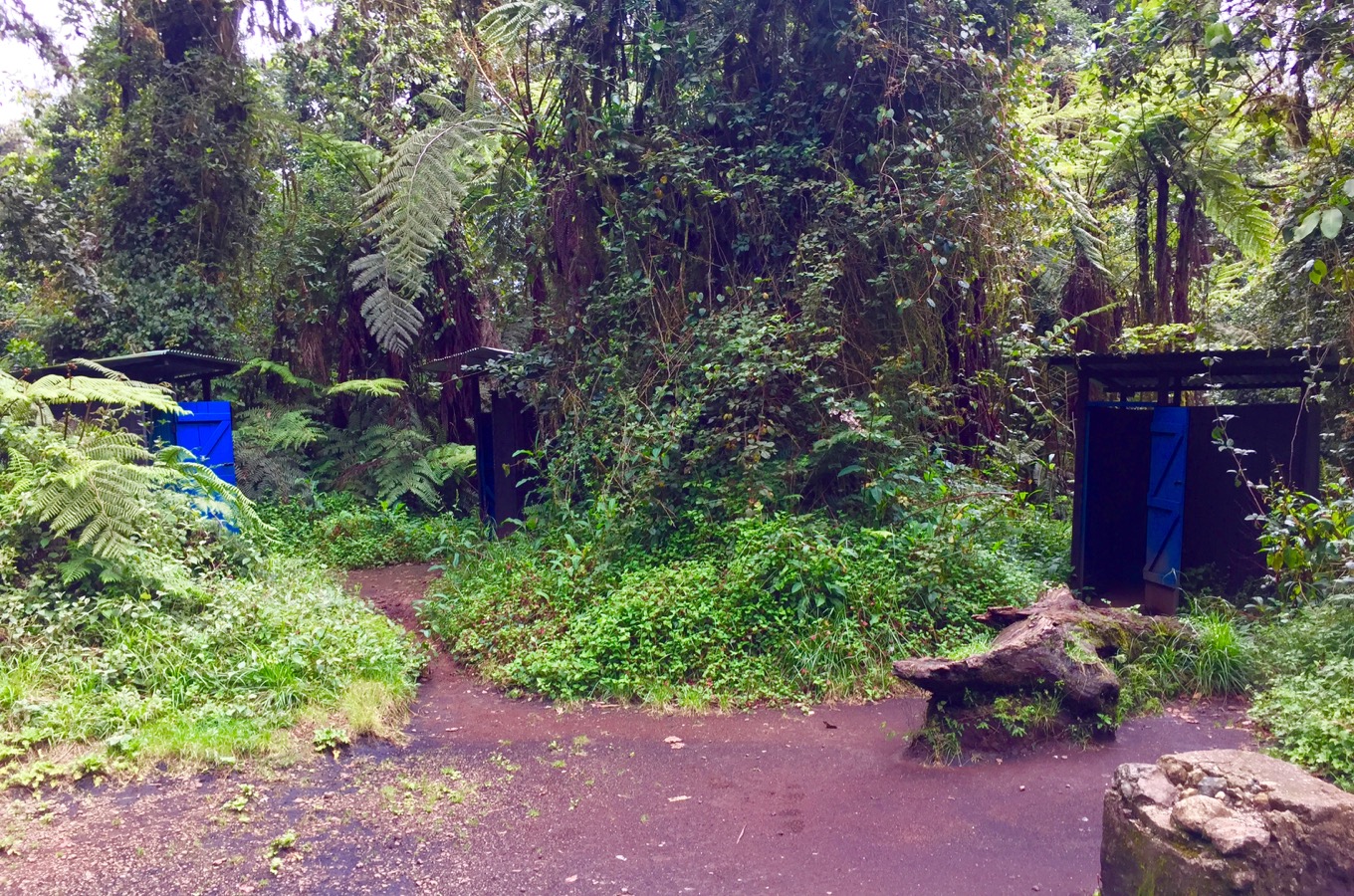 During the ascent, I was occasionally reminded of Daniel Kahnemann’s book “Thinking, fast and slow”. The porters, who sometimes left long after us, normally overtook us the latest during lunch break. Anyhow I felt like we were crawling up the mountain. That, however, was the best we could do. “Pole pole” – slowly, slowly. Walking slowly allows your body to much better acclimatize to the height and thus also prevents altitude sickness. Therefore, I found it even more impressive that the porters overtook us so quickly carrying considerably more weight than us (my daypack was around 6 kg).

Another two hours and some short breaks later, the until then thick rain forest started to thin out. We had finally reached the beginning of the moorland. Shorter trees as well as an increasing number of ferns and mosses are typical for this vegetation zone. Moreover, it got slightly chillier, and the temperature dropped from originally around 25 °C (77 °F) to around 17 °C (around 63 °F). Only some minutes later, after nearly 5 hours hike, Erasto finally announced: 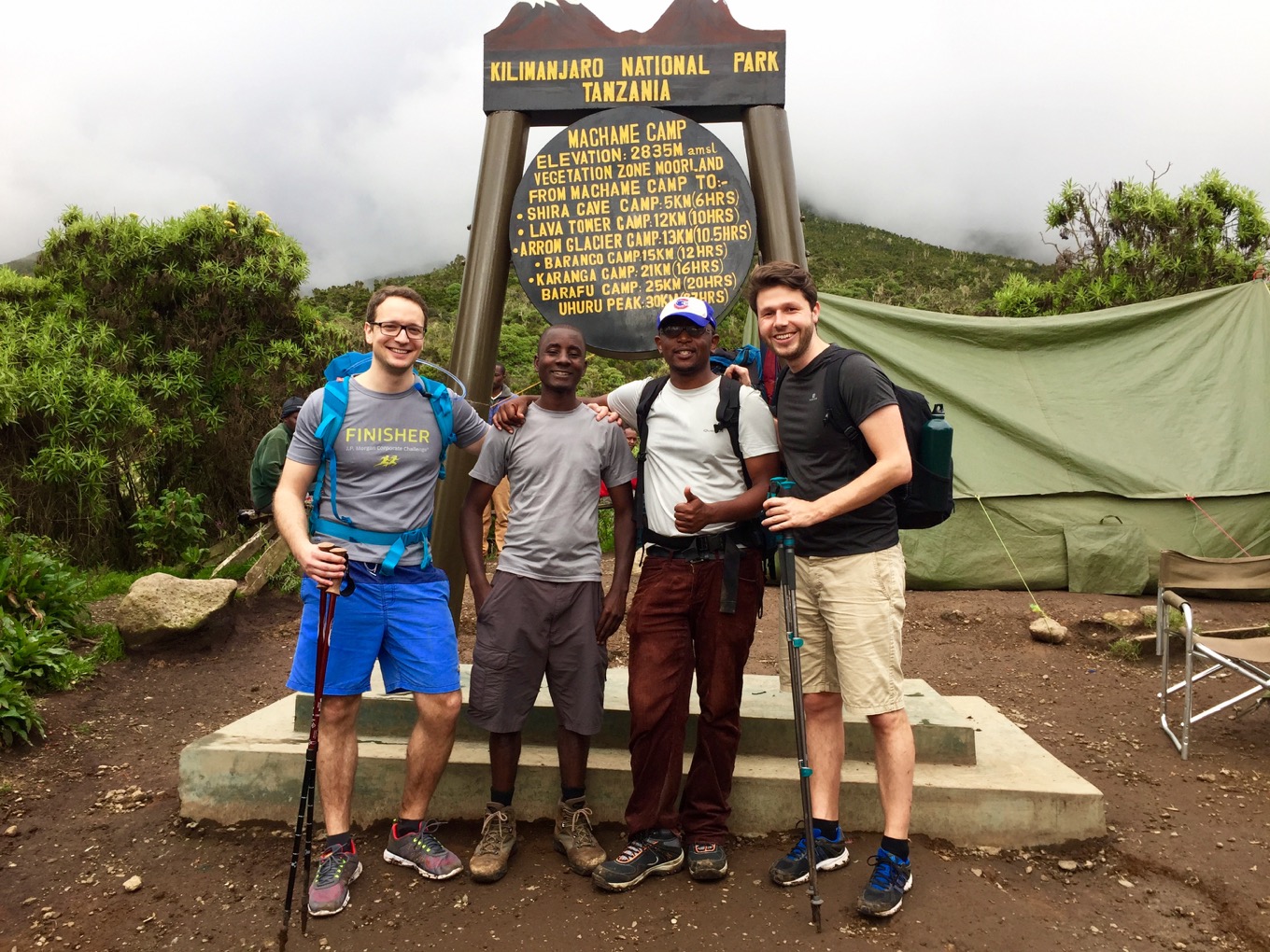 In the late afternoon, we finally reached the first camp of our trip, Machame Camp, situated at 2,835 meters (9,391 ft) above mean sea level (AMSL). There were numerous bare spots amid the sometimes only six-foot tall trees. These were partially filled with tents. Moreover, as in every camp along the route, there was a wooden hut for registration upon arrival in the camp as well as toilets (outhouses). The latter, however, neither provide running water, nor paper, nor soap. Best bring everything you need yourself. In Machame Camp we also had the first longer conversations with other tourists, who we met again every now and then during the upcoming days. Moreover, for the first time we had a good view of Kibo, which was bedded in the gold-red light of the evening sun. Impressive! 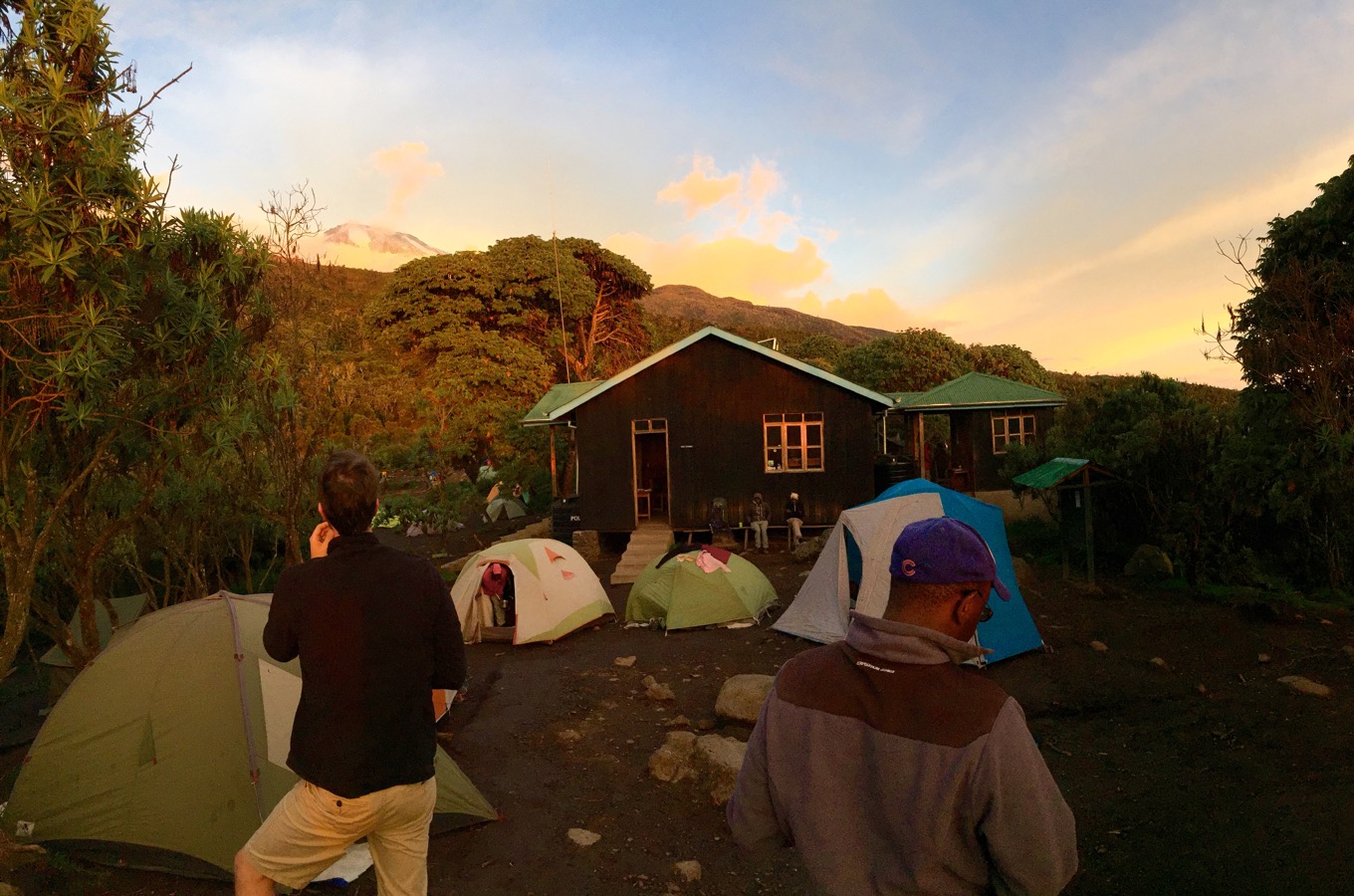 When we arrived, our tent had been already set up. Erasto and the rest of the team tried to make everything as comfortable as possible for us. The tent was designed for two people and sufficiently large. There were two thin mattresses on the floor. This still didn’t create the same type of comfort a normal bed would have, but it increased the quality of sleep considerably compared to a simple sleeping pad. 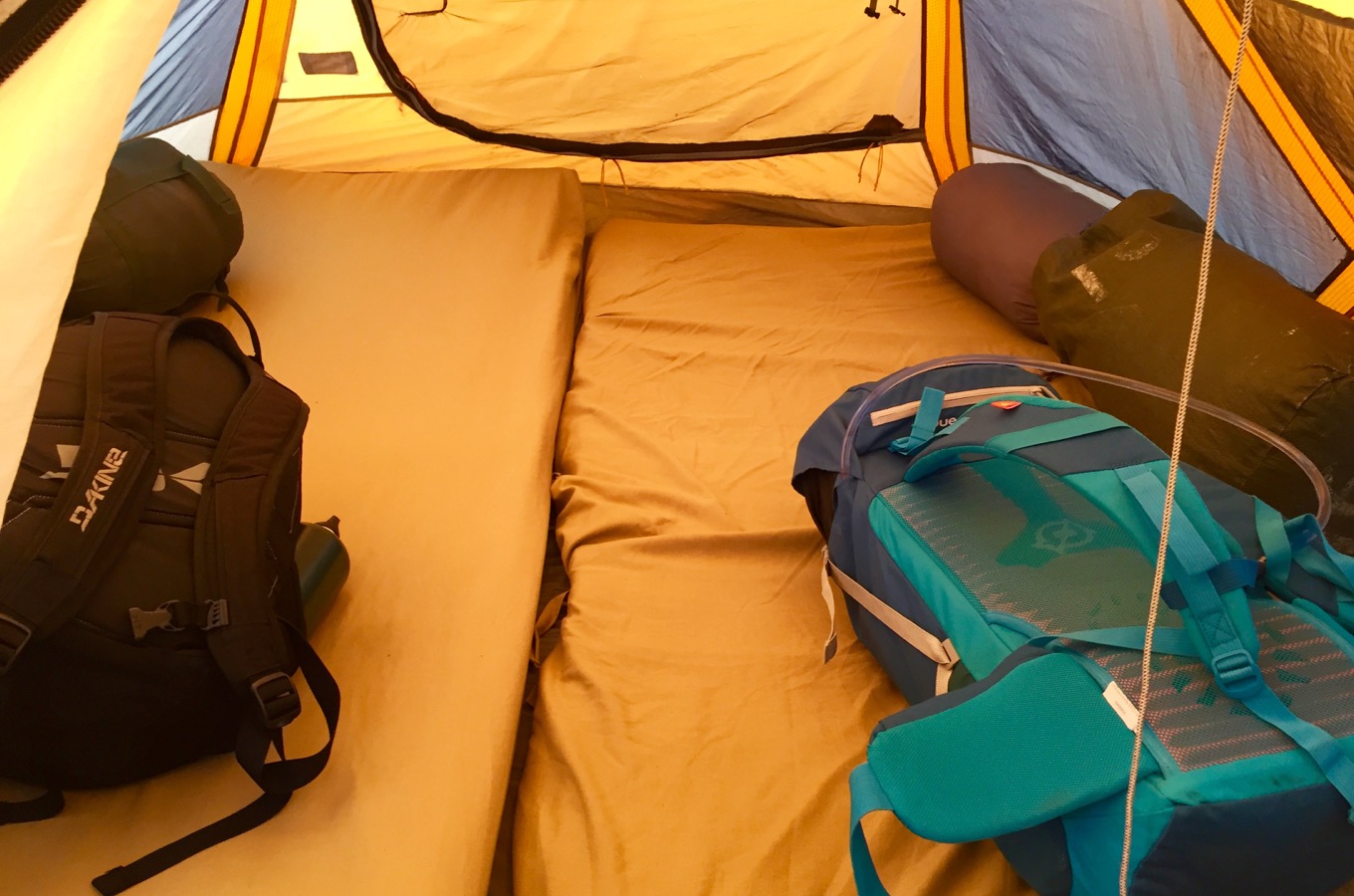 For dinner, our cook had prepared chicken and rice, and a vegetable soup as a starter. As in the entire region, we stuck to the principle “cook it, peal it, or leave it”. This means as much as “do not eat raw fruit and vegetables, and if, only peeled (personally)”. We stuck to that principle, even if there were only few occasions where we were served such food. 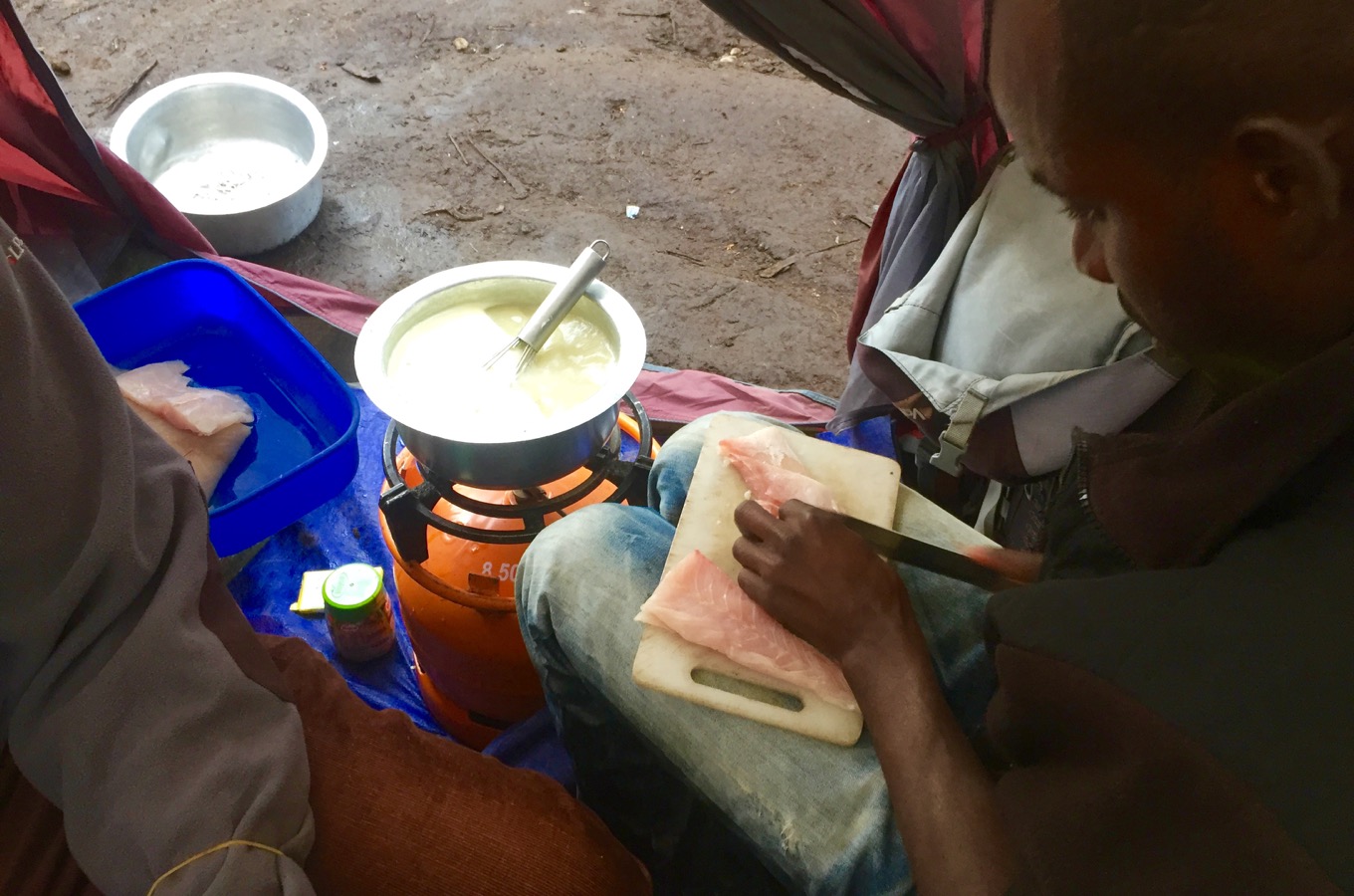 And what next? Next came our every evening briefing.

After dinner, we discussed the current climate conditions and how to be dressed for the night. Because: Even if it can get relatively warm during the day, at night the freezing point is reached easily at higher altitudes. Thus, it was quite common for us to sleep in our jogging pants and fleece jacket. Moreover, we got tips on how to be dressed for the following day so we could already get prepared in the evening. Finally, Erasto measured the oxygen saturation in our blood as well as our heartbeat – a procedure to recognize signs of altitude sickness early. We only put a clip (pulse oximeter) on our index finger, hence, everything free of pain.

After a long day, we were laying in our tent around 8 p.m. – first day: Check! 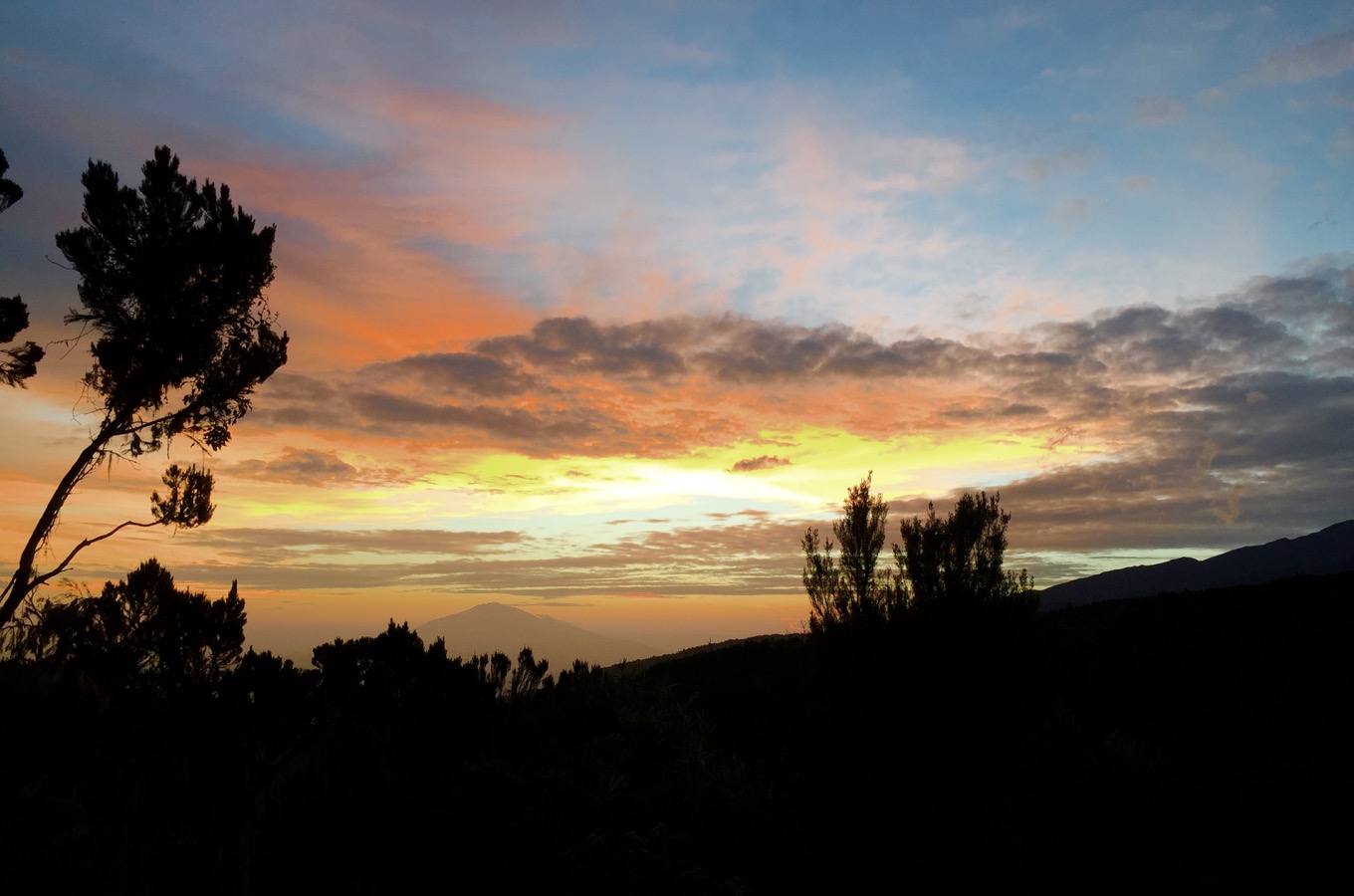